answers for a friend 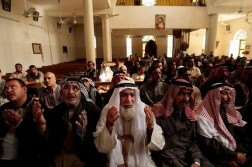 The simple answer to the question is ‘Yes’ in as much as it is possible to be a follow of Jesus within a culturally British setting. It is important to have a biblical framework in which to view any culture. We tend to think of Islamic culture as different to British culture, thinking that Islamic culture is somehow more at odds with God and his people. The only distinction the bible makes is between God’s people and the World. The World has beliefs and practices that exchange God’s truth for a lie. Everyday the World is acting in a religious manner; the World is worshipping ’self’ in all its different guises.

In Islam those beliefs and practices are more clearly articulated and more corporately owned. However In British culture the worship of image, money, comfort and fame pervades all aspects of our lives. The Muslim has his mosque, but the Brit has his shopping mall. Visit any of the out-of-town shopping centres in the UK and you will find the architectural design full of religious motifs. Every person in the World worships; the question is what do they worship? There’s no benefit in making a distinction between cultural Islam and religious Islam because to do so would be to minimise the fact that in every community in the World whether overtly religious or not there is an act of worship taking place. Understanding this allows us to view all cultures as both potentially neutral and potentially antagonistic towards God’s people.

As soon as an individual chooses to follow Jesus they place themselves at odds with the World. Whatever culture we are in we will have to stand against the beliefs and practices of our old community. We no longer ‘remain’ in the World; we’re now refugees with a home that is not on the Earth. Any Muslim who chooses to follow Jesus, any Brit who chooses to follow Jesus will find they no longer belong in the World. They will be different because their actions and words will reflect a worship of the one true God; their acts of kindness, their message of grace will rile those around them. They will no longer participate in the systems of worship that their community undertakes.

But this separation from the old community is not a physical separation it is a spiritual separation. Christ asked the Father to keep this new community within the World but not of the World. As such God’s people are like specks of light in the darkness. We don’t all clump together and come out of the darkness, instead we expose the darkness and we transform the darkness. For the Muslim I think that means they can still dress, eat, sing and act as a Muslim in so far as it doesn’t constitute an act of worship or identification with the World. We should be seeing Muslim churches.

Working out what constitutes an act of worship or identification is not easy but it is something that we should all be grappling with for the rest of our time on Earth. As an aside, the British church is lazy when it comes to this question and is increasingly conforming to the practices and beliefs of the World. Even as it thinks of itself as standing for moral purity I think we have lost sight of all the other ways in which we worship alongside the World; rampant individualism, seeking special privileges, not identifying with the poor and failing to have a prophetic voice against injustice and oppression. Paul grappled with the question throughout his ministry and it led him to make choices in which he had one believer circumcised as an act of staying within the World, and another believer not circumcised as an act of not being of the World. Both choices were correct and both choices reflected a view that culture and religion are both neutral and antagonistic towards the worship of the one true God.

Those who follow Jesus need to identify themselves as such. I therefore don’t fully agree or perhaps understand the case for the ‘insider-movement’ in which Muslim-background believers do not publicly ‘come out’ as Christians. I fear the reasons for this have more to do with avoiding persecution than a missiological choice to stay within the World, but not of the World. That said you do hear and see of believing communities within Muslim countries who look nothing like their neighbours, looking more like those from the West. This is something I would work hard to avoid and something I would want to teach and disciple Kurdish believers about in the UK.