Bosnia Round Table - Join Us! 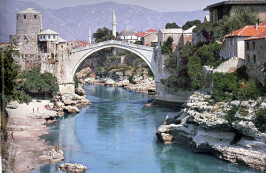 Bosnia has more than 2 million Muslims, with only about 500 followers of Christ from Muslim backgrounds.  Konjic is a Muslim city about 45 kilometers (30 miles) from Bosnia’s capital, Sarajevo, with no Bosniak (Muslim background) believers.

Fisnik and Manjola Zenelaj,  together with their family, are planting a church in Konjic, with a vision to plant churches in other unengaged cities along the River Neretva. In January, Sarah from the UK and Ira from Ukraine will be joining their team, but more workers are needed both in Konjic and other cities in Bosnia.

Radstock is calling church leaders and prospective workers with a vision for Bosnia to learn, pray, explore and plot together.  Join our “mini Round Table” from the 3rd to the 5th of November, and you'll see Konjic and the capital, Sarajevo, and hear from both local leaders and other Radstock Network leaders.  There will be a strong emphasis on Bosnia, but also time for you to connect with missional church leaders from the wider Balkans, Europe and North America.

Those who can come early or remain later will be able to worship with Bosnian churches and tour Sarajevo and Mostar. Bosnia is truly a country where East and West meet. Sarajevo was under siege from 1992 to 1996 as the Serbian army put pressure on the Bosnian inhabitants.  Mostar is Bosnia's iconic but ethnically divided city, famous for its Ottoman-era bridge over the Neretva. This bridge (shown above) was destroyed in the war but has been rebuilt.

1.  First-hand insight into the back door of Islam into Europe, and the millions of unengaged and overlooked Muslims in Europe.

2.  Opportunity to meet other pastors from the Balkans, Europe and North America who share your vision for mission.

3.  Time to learn from and encourage the Zenelaj family and other national leaders in Bosnia.

4.  Opportunity to consider your next steps of partnership within the Radstock Network.

Reasons not to Come:

(We can't think of any either.)

Register here. We are excited about this time and look forward to seeing you in Bosnia!