One of the Radstock principles that we emphasise is that partnership in mission is best done when local communities of believers are cooperating together. In the context of a short-term mission team, it means that ministry is not in isolation, but is an integral part of the longer-term work in that locality. Long after a team has gone, the impact of what they have done goes on and relationships continue to be built, as those who live there all year round, live as salt and light in that community.

An important part of this, unsurprisingly, is that the church of the receiving culture be listened to when plans are being made. This should be obvious but sadly, it is not always. It is easy for teams of people from (let's be honest) usually British and American churches, to pile in and say ‘this is what we are going to do - this is what is needed here - this is how it should be done'. Even if it is not said in quite that way, it's implied.

In Kosova, this past week, we have tried really hard to take our cues from the local believers in the city of Peja, and to serve their wider work. A multi-church team from Derby, Harpenden and Birmingham in the UK, and Hungary, Romania and Kosova partnered together in the gospel. We did not do it perfectly by any means, but we did consciously seek to consult and connect and contribute to the vision and work of the local church community.

We plugged in to the ministry of Charis Cottage, working among some of the poorest families in the area, and tried to build relationships with these families that have been connected with the church for so long now. It was good have a BBQ on some rough ground near where some of the families live. We wanted to go where they were rather than asking them to come to one of the church-y buildings which would have been off-putting and a hassle to get to. It was great to sit around in the blazing sun, eating beef burgers, doing face-painting, chatting about cars with the men, and jumping around to some of the music blasting from the stereo. It is hard slow work, but that's how it is: long term - low key - relational.

Gani, pastor of the church in Peja, was keen that some of the team get involved with the men's and women's groups, encouraging the local believers. We'd never done that before, but this was something the local leadership felt was important, so we took their advice and planned it in. A number in the church are cautious about their faith, but meeting with other believers from different places, helps them know they are not alone, and raises their spiritual temperature. 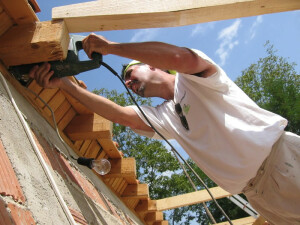 There were many other things too numerous to detail now. Some of the team were on a building project in the mountains - a brilliant vision to have input into many thousands of lives as people spend time at a camp, away from the glare of the neighbours, and get to think through the gospel for themselves. There were afternoon children's meetings in another part of the city. Some team members went to a weekly art/bible class. There was a trip for two of us to Gjilan in the east of Kosova, to see what God is doing there. And there was time together as a team praying, learning about gospel partnership from Philippians, and considering what being a fearless, bold, sacrificial, passionate, loving, spirit-filled follower of Jesus looks like.

Loving God and his truth enough to live it.