Posted by Brad Byrd and Nick and Erica Lugg

High fuel prices and soaring food costs may not be all bad and may actually be creating access to capital for the poor of Africa. According the the Wall Street Journal (6/30/08) "Rising prices are luring more private investors to Africa's food sector, where they are convinced for the first time in decades they can make a profit. The hitch is finding the right businesses in which to invest." Due to rising costs of transportation, importing is becoming less and less cost effective and growing locally becomes the better option. Through small loans Radstock Ministries Africa Specialists, Nick and Erica Lugg and their local church network called Lordsway Ministries are seeing big things happen. When you next fill up at the pump, consider donating the cost of a tank of gas to Radstock's MED fund. It could be the difference between making it or not for a small farmer and their family in Zambia.

From an June 8th email from Nick and Erica Lugg...

We have two leaders in our church who have struggled financially for a long time, but are very industrious and hardworking. They are a brother and sister, Rodin Ngandu and Nester Masumba. Mrs Masumba is married to the owner of Mine Farm, a large 400 hectare farm. Both have allocated portions of land on the farm but lacked the resources to cultivate them. 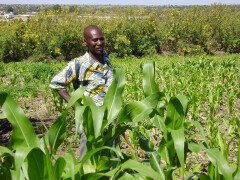 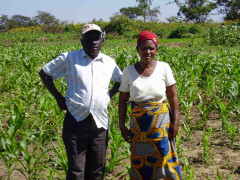 From the money sent by the Pastures [a church in High Wycombe, UK] we gave them each a grant, to clear the land, irrigate, and buy seed and fertiliser, which as you can see from the photos they have done. This is quite a remarkable project because almost everyone relies on rain to grow their crops, but this is the middle of the dry season but because of irrigation, they are growing a lot of crops as you can see from the photos. 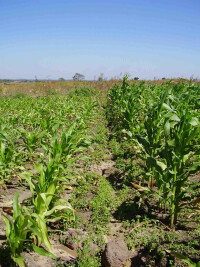 They are growing maize, Chinese cabbage and tomatoes. They are providing food for themselves, also every day they are selling to market traders and they are also giving away crops to needy church families.

We have some money remaining and have decided to give them some more for top dressing fertiliser - you will see from some of the snaps the comparison of maize which was fertilised and that which was not (the fertiliser ran out) - the crops that are a bit stunted can be treated with this new fertiliser so they catch up.

Thank you so much for your support of these farming projects - we will keep you updated as to how things develop.

From the March 08 Lordsway Ministries newsletter...

Some time back, Lordway Ministries in Zambia partnered with a church outside their network to establish what was called a ‘food bank' project. The church was in a farming area, and farming families were struggling year after year to raise a harvest. Ten families were chosen for the project and each agreed to cultivate one hectare of their land, using seed and fertiliser provided by the project. At harvest time it was agreed that each participating family would bring 25 bags of maize back to the project and would be able to keep everything they realised over and above that. 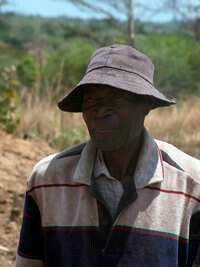 The project was a great success, with some farmers improving their annual harvest tenfold! Enough money was raised to provide seed and fertiliser for the same ten plus two more families the following year. The farmers were able to give their families food security for the whole year and have enough to raise money for other things on top! We are looking to replicate this type of project within Lordsway Ministries - two of our churches consist mainly of farmers, Mansa and Kalulushi. The farmers have the knowledge and the willingness to make it work, they just need the resources.

If you or your church would be interested in partnering with such a project please let us know. At the time we ran the original project, seed and fertiliser for one hectare was about £75/$150 - there have been some increases recently, we will keep you posted!