Taking the good news beyond the mountains

I stood with our friend Tun Chaing, an indigenous missionary in Myanmar, as he looked at the mountains on the other side of the valley. He pointed out of the window of the wooden hillside house we were in, and described the villages that he visits beyond those peaks. He explained how there are no churches in those places. None. No followers of Jesus Christ there. 'I go and meet them and teach them about the gospel and they want to know more about it', he tells me. 'Some of them want to become believers. I need to go back to see them again but it takes me a long time to get there on foot.'

Brother Tun is supported by the Evangelical Christian Church in Mindat; a small church with a big vision. They love the peoples of Myanmar and are willing to go out to connect with the many unreached in this nation which is largely a Buddhist country, though forms of Animism holds sway for many in these village areas.

Another indigenous worker, Hung Key, told me about plans he has to go along with the young Assistant Pastor of the Mindat church, to reach out to several villages in the coming months. They will go on motorbikes, if they can get hold of reliable ones, and travel to tell people the good news of Jesus. He is also busy serving the area he lives in as he makes plans to start teaching English. Many people want to learn English as the country begins to connect with the wider world after so long in isolation. 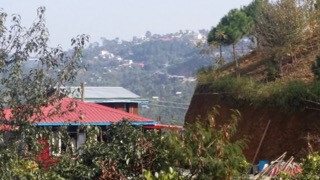 These brothers and sisters were a real encouragement to me as I spent time with them, listened to them,and prayed with them about their country and their area. Myanmar has come a long way. 200 years ago Adoniram Judson was making his first attempts to connect with these peoples amid great hostility. Even just 10 years ago leaders of this country were describing Christianity as the 'C-virus' and making life difficult for churches and especially the starting of new churches as there were many restrictions. Today the country stands on the brink of its first democratic government under Aung San Suu Kyi and there is an optimism in the country as we connect with these brothers. They are excited about their new freedoms. They are excited about their faith, and they love their country. They want people to know. Some may accept, and others may reject but someone needs to tell them!

We can have a real part to play here. We can help make use of the new freedom by getting alongside our brothers and sisters in the Radstock churches there, and praying for them, giving to fund motorbikes, or helping train leaders and disciplers. Would your church adopt one of these churches as a partner? Would some of you consider going on a trip with me later in the year? This is just a snapshot of one church's vision. We could visit them, but there are others too, including in the former capital, Yangon, where churches are developing initiatives among students, among widows, among orphans and families.

People have prayed for this country for many years, and prayers are still needed. You can touch the lives of people in these remote mountain villages.