the limits of incarnational models of mission part 1: the triumph of the many over the one 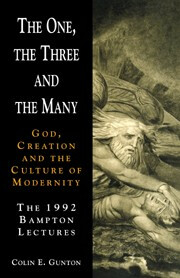 To recalibrate its activities around mission, the church has had to come to terms with cultural pluralism; the idea that here are many varied local cultures for the gospel to engage with. In the missional church literature there has been helpful analysis and enthusiasm for understanding the local and the particular in mission. Writers like Alan Hirsch and Michael Frost have helped us to find ways to enter cultures, listen for local stories, affirm local cultural difference, and avoid imposing models of church. They have challenged us to look for organic models of church that give the gospel expression through local culture.  The incarnation has been the mediating principle for much of this helpful insight. In the incarnation we see God affirming locality and difference by entering a culture. The gospel emerges in the world through a local culture and spreads as God’s people enter other cultures.

In his book, The One, The Three and the Many, Colin Gunton brings a robust Trinitarian theology to bear on the culture of modernity. Modernity has tried to take the local and particular seriously. It has opted for radical embodiment as its organising principle. This is the idea that meaning in the universe comes from the stuff of everyday life; bodies, language and culture, rather than transcendent universal principles. To some degree, modernity has its own ‘incarnational’ approach to local culture.

Gunton argues, however,  that modernity is built on paradox. Far from celebrating cultural diversity or providing a foundation for difference and particularity, modernity has in fact created new forms of homogeneous culture, often more oppressive than the ideologies it tried to throw off.

In this series of three blogs I want to suggest that Gunton’s critique of modernity’s approach to local culture might reveal some correctives for our incarnational approach.

Gunton argues that the worldview of antiquity was seen by modernists and postmodernists as privileging the ‘one’ above the ‘many.’ From Plato’s universal forms to Augustine’s God as a divine rational will, antiquity squashed cultural diversity under the weight of single unifying principles. Particularity, difference and materiality were not seen as fundamental to the nature of creation. Instead they were seen as departures from the purity of the unity of the divine one or universal forms. In such a worldview difference is bad. Modernity attempted to distinguish itself from antiquity by attempting to privilege the ‘many’, the local and diverse, above a transcendent ‘one’.

Modernity achieved this by emphasising the particular through displacing the divine ‘one’. Embodiment is essential to this displacement. This happened through William of Ockham and modernity’s obsession with materiality. William of Ockham, the champion of the particular, rejected the idea of a unifying will of God or transcendent universal principles as the foundation for meaning and coherence. Instead he made the rational will of humans the starting point of coherence and meaning-making. This paved the way for modernity’s move to embodiment because it made human experience the organising principle of the universe. Modernity’s emphasis on materiality supplied a number of theories for the mechanisms of human experience. Marxism, socio-biology and early psychology made economics, evolution, biology and neurology the basis of human experience. The concepts of mind and will, which were once considered transcendent and non-bodily entities, were now cemented to economics, biology and neurology.

So the transcendent one or divine will was replaced by many embodied wills as the organising principle of creation. This move to locate the organising principles of the universe in human embodied experience could be described as a modernist, secular incarnational move. It promised to make cultural diversity and the particular the starting place for accounts of being. Along with this shift, the idea that the cosmos held meaning was replaced by a view that time, space and materiality are meaningless. Truth and meaning are locally generated by the activities and sense-making of people as embodied wills. In order to enter truth one has to enter a local culture or worldview.

On a surface reading, modernity looks like the triumph of the many over the one in which the local and particular are celebrated. Gunton stresses that of all cultures modernity has achieved the most for the cause of cultural diversity. But modernity has also created the herding culture of consumerism, communism and fascism along with the attendant bloodshed, addiction and misery. Paradoxically, in each case, the many have been forced into forms of identity that are shaped by a new, all powerful one. Consumerism transforms us into the image of the market. Identity is worked out through the consumption of mass-produced products and logos, creating as much homogeneity as individuality. Communism erected the state as the transcendent one in the name of giving ownership of life and work back to the masses. Fascism similarly attempts to serve the many, but does so by making the many conform to the will and image of the head of state. Gunton’s point is that modernity has not escaped antiquity. It has repeated the same mistake; erecting a new one over the many. The only difference is that modernity has replaced transcendent oneness with more immanent and earthly forms: market, self, state, race.

These ‘false transcendentals’ are demonic, says Gunton. They are idols or God replacements. Like all idols they undermine our humanity and identity by drafting us into the service of their image, crushing God’s design for community and individuality. Modernity thought that the enemy of diversity was a transcendent one. But, by bringing the transcendent down to earth and making it immanent and human, modernity has not served the many. It has created new forms of homogeneity that undermine identity and that compete with each other (e.g. consumerism verses socialism). The move to embodiment and the down-playing of transcendence has failed to create both diversity and unity. Embodiment is not a mediating category that can successfully manage the relationship between the one and the many. If this is true, then maybe also ‘embodiment’ in a Christian guise as ‘incarnation’ cannot on its own be the basis for a theology of cultural diversity and engagement. In the next two blog reflections on Gunton I want to unpack this argument.

Click here to or here to purchase Gunton's The One, the Three and the Many: God, Creation and the Culture of Modernity.